To run 100 miles is to push yourself to that place where you waver between delusion and sanity. Stripped down to nothing, bearing your soul.

....And yet the will to continue, to persevere, endures. Quitting is not an option. And at the pinnacle of human suffering, where mind, body, and spirit are broken, you find ease.

To say my race was ideal is far from the truth, but, it was still everything I had hoped for. To me, running 100 miles is more about the journey. The suffering, perseverance, and feeling of accomplishment as you overcome all adversity to cross the finish line. It was #that exact feeling that I was seeking at Western States.


And my race this year didn't disappoint.

After a few days to reflect, I am more and more satisfied with my performance this year. In fact, I'm more proud of my finish this year compared to last year. From the outside it must seem like I didn't meet my goals, as many people have consoled my effort, rather than congratulated it. But, I am not disappointed, or discouraged. If anything I am more in awe than ever before.


My race wasn't all dark and dismal. Early on I was able to fully enjoy the beauty of the course. I started right where I wanted to be, taking it easy up to the Escarpment. I had some great girl talk with Kaci and Aliza, and was really looking forward to the view from the top.

At the summit I took a moment to wait for Kaci and Aliza so we could all take in the sunrise together. It was amazing.
For the first 30 miles I rolled through the high country with a smile on my face. I felt wonderful and the wildflowers were stunning.
Somewhere around 12 or 13 miles I caught up to Magda and we shared some miles together. We didn't talk much, but it was so comforting to just be running, knowing we were out there together.

Coming into Robinson Flat, I was still right on track. I felt good and was moving along at a similar pace as the previous year. I saw my crew, refilled with supplies, and took off down the trail.

It was hot. And somewhere over the next 10 miles the wheels started coming off. Looking back, some of it was nutrition related. But my body also was just not cooperating. I rolled down into Deadwood canyon, but was feeling the effects of my effort.

Slowly, I walked up Devil's Thumb. By this point I was feeling nauseous and low energy. Not a good omen at 40-something miles in. At Eldorado creek I hit my low point. I was still nauseous, but now was also low energy and dizzy. I was not in a good place. But, I could still take one more step. So I did.

I came into Michigan Bluff in the lead, but my I was already a bit defeated. My crew could tell, too. And here I made yet another mistake. Hindsight, I was behind on calories and should have take the time to really replenish and catch up. Instead, I grabbed a small flask filled with sprite and headed on my way.
The stretch between Michigan Bluff and Foresthill was probably the slowest section I covered all day. I could hardly run. I was beyond exhausted. Yet I was still determined not to give up. Even as Magda passed me walking up Bath Road, I didn't let it discourage me. The thought of running another 40 miles was overwhelming, but I knew it was going to happen.

From Foresthill on it was about survival. Zach joined me for the remainder of the race and really pulled me through. Without his constant affirmations and positive attitude, I don't know if I would have made it. Despite my emotional state and defeated spirit, Zach continued to believe in me. That is a true partner. And that was what carried me on.

The rest of the night was somewhat of a blur. I shuffled along as best as possible and tried to stay positive. We didn't move very fast, but we kept moving forward. When we got to Highway 49, I was still holding on to third place. From there we made it a goal for me to finish in that position. It helped, having something to work towards.

Since the gap behind me wasn't huge, Zach really pushed me on. When we got to the open meadow before No Hands Bridge, he turned to me and said "Ok, now you have to run. And when you get to the downhill you have to run like you stole something."

Easy peasy. Except not at all. But, I gave my best effort and did move along pretty well. After we crossed No Hands Bridge, Zach gave me another goal "We are going to have to push hard up to Robbie Point. It's going to hurt and it's going to suck, but you can do it."

Ugh. That hill is hard enough when you are not tired, let along 97 miles into a race. But, once again I surprised myself as I dug deep and ran most all of the climb up to Robbie Point. Behind us we could see a couple headlamps moving closer. Fearful that it was the next female, we decided to run the last mile as hard as I could.

And we did. Zach didn't let me let up until I reached the track, finally confirming that I was indeed going to cross the finish line, and hold on to third. 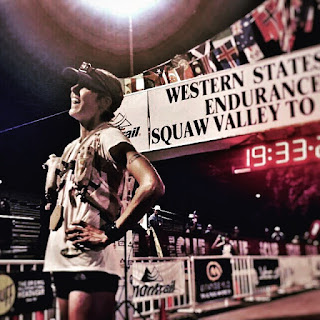 Emotions overcame me. The day, my race, and having my husband see me through the darkest parts;  really became real. And once again, I floated around the track to the sound of Tropical John's voice. It was just as spectacular as the last time, and felt even more satisfying.

It's the tough days that really define us. And the last mile, no matter what happened over the previous 99 miles, is magical. It's a feeling that I will forever cherish, no matter if I finish first or last. It's in the suffering that we find greatness, and #that is always worth it.

Posted by StephanieMarie at 2:58 PM