Lake Sonoma was my debut 50 miler and turns out, I LOVED IT! I had awesome weekend down in Healdsburg and couldn't be happier with my first 50 mile race. I learned a lot and can't wait to do another one! Maybe at this point the amnesia has set in and I've forgotten how hard it was, but I'm really excited about more upcoming races! 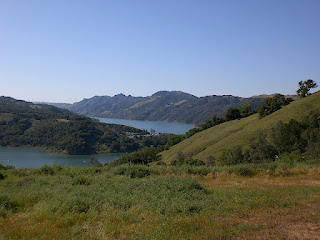 The race course was spectacular! How often do you get to run 50 miles on single track? There was only a short section of pavement at the start and the rest of the race was on awesome trails that weaved around Lake Sonoma. It was green and lush this time of year and the temperature was near ideal for racing. I knew it had been rainy the weeks prior to the race, so I was anticipating some mud and creek crossings, but I had no idea just how wet it was! I almost lost of shoe at one point when my foot went into some deep mud and almost didn't come back up! There were also some pretty deep river, I mean creek, crossings.


This race was definitely a great experience and I learned that a lot of things can happen in a 8 hour race. Earlier in the week I had the stomach flu which totally annihilated me for 48 hours. I guess it was a forced taper, but I was not happy with my luck. Nothing like starting the longest race of your life totally depleted! I felt pretty good race morning, with just a minor irritated stomach.

I tried to start pretty conservatively and stay on top of my nutrition. I wasn't really sure how to pace for 50 miles, but I did my best. I hiked most of the hills (ski-walked actually, it's a lot faster) even though everyone around me was running. Things were going pretty well until around 30 miles. I think my body thought it was done, since I've never run further. I made my first mistake and grabbed some PB&J sandwiches (they were seriously calling my name!) rather than stick to my plan of gels and sport drink. Sometime after that I found myself in a pretty bad state. Having just finished an in depth sports nutrition class at OSU, my head started swimming with thoughts of how my choice of food was not ideal and now my body was having to do gluconeogenesis……
In any event- I bonked. I felt pretty terrible. Around that time Tyler passed me like I was standing still. She was very encouraging as she effortlessly flew by me, but there was no way I could hang on. I was in survival mode. My race plan shifted at that point. My main goal for the race was just to finish, but in the back of my mind I had been thinking about trying to place in the top 2 to earn a spot into Western States. As Tyler passed me I let go of that goal and went back to my previous goal- just finish. One of my favorite mantras when I'm getting tired and is from Dory in Finding Nemo: "Just keeping swimming", only I change it to "Just keep running, just keep running…"

I had some pretty low spots before it got better, like my stomach vortexing and falling flat on my face 3 times because I didn't pick up my feet. BUT, eventually I did come out of it! It was amazing, one minute I was shuffling along and then next I was like 'ok, game on'! The last 2-3 miles (yes, it took that long) were amazing! I was able to run again and actually passed a couple people. I was so happy when I crossed the finish line and ecstatic to be 3rd!

After the race everyone was hanging out eating tamales and enjoying the sunshine. It was great to sit and chat with friends and meet some new people. I have really enjoyed getting to know the ultra community. People are so genuine and down to earth! I met a lot of new people racing over ther weekend who I can't wait to see again in the future. I met two of my TNF teammates, Leigh Schmidtt and Rory Bosio, at the race. Leigh was kind enough to invite me to dinner with his family the night before the race. I could not believe how generous he and his wife were to me! Rory and I shared a hotel and spent most of the weekend together. I definitely felt like we were longtime friends even though we just met.

The next day was pretty much the best day ever. Rory and I got some coffee and went for a walk before she had to drive home. After, I went down to the French bakery in Healdsburg and got a croissant (my favorite!). I had a few hours to kill before the wine tasting at noon, so I walked around downtown Healdsburg. I found a yoga studio and decided to take a class since there was one in 10 minutes. Turns out it was only me and teacher. It was totally awesome! She just tailored the class to what I needed and helped me stretch out. Afterwards I went and sat outside in the sunshine and read a book. At noon I joined the rest of the crew at Wilson's winery for a tasting and tour. It was so great to sit in the sun and taste some great wine. Later in the afternoon I drove back down to SFO, got some sushi, and flew home. What a great weekend…..


I am so excited about my upcoming races this summer! I think it's safe to say I'm addidcted…..


Posted by StephanieMarie at 10:10 AM No comments:

I finally did my first race of 2012! It was a great way to kickoff the start of my spring break. Running a 50k race is probably not most people's idea of fun, but then again I'm not really typical….


The Gorge Waterfalls 50k was a spectacular race course! I would highly recommend it to anyone looking for a great trail race with some beautiful scenery. We passed at least a dozen waterfalls and the aid and finish line spread were top notch! The race was an out and back this year, meaning, the first 7 miles and last 7 miles were up and over a pretty tough climb. Honestly, the last few miles of climbing were much more difficult than I had imagined. I usually like going uphill, but by the time I hit the hill a second time, I was definitely in the pain cave. As I attempted to run/power hike up the steep grade, I tried to to simultaneously ignore the signs that told me how many switchbacks I had yet to encounter and dodge all the tourists that were now out hiking. As I passed two guys one of them commented to me "Wow, you sure look tired." I resisted the urge to tell him what I really thought, but just mumbled back "Well you would be too if you'd just run 25 miles!" I think this took them by surprise as the other hiker yelled after me "We didn't even drive that far to get here!" I also had a little girl inform me that I needed to take a shower when I got back, because I was really dirty.


The race itself was just what I needed. I was a little nervous when we started the first climb and Jenn Shelton took off like a bat out of hell. I heard her yelling at Jeff Browning just ahead "Browning I'm going to beat you if I have to kill myself to do it!" Oh boy. I resisted the urge to chase and reminded myself this is supposed to be fun- it's spring break after all! I ended up catching back up to Jenn a few miles later and then we ran together and chatted for awhile. At some point I think she backed off due to a sore ankle.

Despite almost everyone going off course within the first 200 meters (yes, we all missed the first turn), the race went smoothly. I felt solid about my effort and was pretty excited about receiving a handmade coffee mug after finishing! 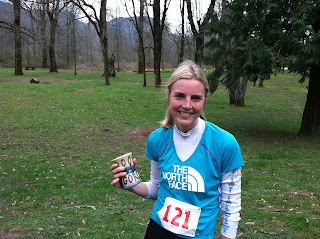 Now, on to the more exciting part of the weekend: Wine tasting!

I had not spent any time in Hood River before, so Zach and I decided to stay a few days to explore the area. Hood River is a cute little town with great trails and vineyards (two very important qualities in my book)! The day before the race we decided to do a little wine tasting at  Marchesi Vineyards. It was pretty awesome! They had some great wines (huge selection) and the vineyard overlooked Mt. Hood.

After racing, we hurried home and went to a few more places, including Cathedral Ridge and Naked Winery.

The following day Zach and I had planned to do a nice 'recovery run' on some of the nearby trails. I forget that every time Zach and I do something it turns into an adventure. Like the one time we were going to 'spin out our legs' on a nice bike ride after the Mt. Ashland hill climb….which turned into a 5 hour ride with a 10 mile climb in the middle. Or the time we rode around crater lake after racing, where we were either going 3 or 30mph, or the time after the PPP when we did an adventure race that resulted with me in tears because I was riding so hard to try to keep up so we could win….. :)

In similar fashion, we ran on the Syncline trail, which basically went straight up and then straight back down. I can't really complain though, the view of Mt. Hood from the top was pretty amazing and as much as I joke about it- I do really enjoy the spontaneous adventures :)

Posted by StephanieMarie at 6:58 PM No comments: