With Ecuador 50 miler still in my legs I attempted to race another 50 miler just two weeks later. I contemplated dropping down to the 50k race or skipping it all together, but in the end I decided to just give it a go. I really wanted to race and I also wanted to try out some new nutrition strategies. I went into the race with an attitude that I was just going to have fun.  Ashland is one of my favorite places to race. I love the town an the people and have a great time every time I visit. Over the years I've gotten to know quite a few of the Ashland crew, including Jenn Shelton. I really enjoy racing with Jenn because we always chat and have a good time. SOB was no different. We started off together and were just running and talking for the first couple hours. It was so much fun and  the miles flew by.

My common sense kicked in around mile 17 and I got a little concerned about the pace we were running. I've learned the hard way about starting too fast, and my tendency is to be conservative at the beginning and walk the hills. The problem was the trail at SOB was so runable!! The hills were not quite steep enough to walk so I ended up running everything.

Jenn and I reached the 25 mile turn in 3hrs30min, and I was definitely a little worried. I didn't think I could keep up our current pace for the next 25 miles. I mentioned that I was going to chill out for a bit and Jenn responded by bopping past me and taking off down the hill. Grrrr. I really didn't feel like running by myself for the next 4 hours so I tried to at least maintain contact. Tim Olson saved me for a bit by running and chatting with me for a mile or so. He was helping out with the race and running a bit with some of the runners in the 50 mile race near the turn around. I was so grateful to have Timothy to run with, he is such a genuinely nice person!

After a few more miles I hit the big uphill. Again, it was such a runable grade that I couldn't really walk. I had more or less caught back up to Jenn at this point and we suffered together making our way up the hill. I swear we ran uphill for over an hour. I'm not sure how many miles it was, but it took FOREVER! Jenn and I yo-yoed back and forth taking turns leading for the next several miles. Even though we weren't talking much anymore it was really nice to have someone else to suffer with!

At mile 41 we entered an aid station and I decided it was time to go. I left the aid station first, put my head down and ran hard. And I didn't let up, I suffered and kept moving. One by one the miles went down and I found myself with only a few miles to go. The last 9 miles also had quite a bit of climbing and I did my best to run! We had met back up with the 50k course at this point, so I was able to catch and pass a lot of runners. Everyone I passed was so courteous and let me squeeze by on the narrow trail. So many runners were cheering as I ran by and it really motivated me to keep going. Plus, I didn't want Jenn to catch me again :)

I ended up crossing the finish line first in 7hr34min. It was also a new course record, well technically any time would have been a new course record because it was the first year of the 50 mile distance :) I was pretty excited, 7:34 is my fastest time, and I was proud of how hard I pushed myself despite having tired legs. I really have to thank Jenn for my fast time, she really made me work!! She ended up finishing a little ways back, all smiles though! After I left her at mile 41 she had an epic bonk. Props to her for sticking it out and finishing!

It was a great day for other Bend runners too: Zach finished 4th in the 50 miler and Jeff Browning, hot off his San Diego 100 win, finished 6th. In the 50k, both Max King and Marci Kilmek took home the wins. Awesome!

Posted by StephanieMarie at 1:33 PM No comments: 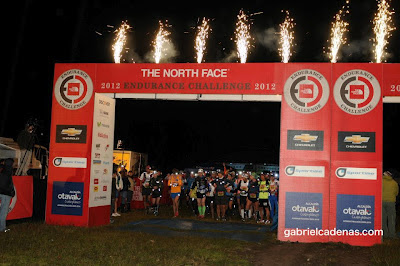 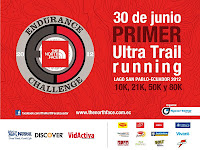 This past week I was in Quito, Ecuador for The North Face Ecuador 80k trail race. I had such an amazing time! It was so different racing in South America and I got to spend the week with some amazing people and run in one of the most beautiful places in the world. It was truly an amazing experience.
Never Stop Exploring…… That was the theme of the week. There were so many crazy things that we encountered over the week and we really just had to roll with it. Everything was an adventure, which made it even more exciting.

Quito is at 3000 meters, which is approximately 10,000ft above sea level. Thankfully we arrived a few days before the race to acclimate to the altitude. We did a few runs   in Quito and also took a tram to the top of the mountain to really get some altitude training and see the beautiful view!  I usually do ok with altitude and was happy that I didn't feel too bad running so high. I was expecting pretty hot weather since Ecuador is very close to the equator, but due to the high altitude it doesn't actually get very hot. It was a pleasant 60 degrees and partly sunny for most of our trip which was perfect for running!

The race took place in small village, San Pablo del Lago, Zuleta which is about 2 hours outside of Quito. The village was right on a lake with mountains surrounding it on either side. It was beautiful! The race course had a lot of vertical, stating went with a huge climb up a mountain that was so tall the top was in the clouds! 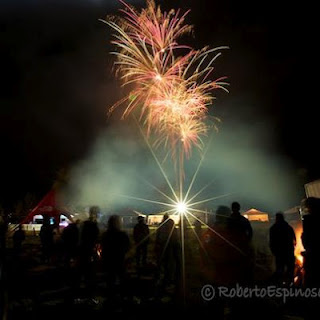 The race started at 4:00am, which meant a 2:15 wake up call. I have never been up running that early, let alone racing, so it was a totally new experience. I was surprised at how good I felt. I was awake and ready to go. The start of the race was exciting! There was music blaring and a huge screen showing footage of other TNF races around the world. As the countdown approached zero, fireworks were shot out of the start gate and the race began! It was definitely exciting!

Running in the dark is tough. The race organizers did a good job of trying to mark the trail, but at 4:00am it is so dark that its tough to see. I ended up getting lost about 10 times during the race. Not just ran off trail a little way, but full on run a mile in the wrong direction or spend 10 minutes searching for the trail. It was a frustrating to keep losing my way, but almost everyone had the same experience. Helen was ahead of me for the first couple hours and then found each other both lost in the same spot. I'd have to say I was really relieved to find Helen and have a friendly face to be lost with! We spent the next 3-4 hours running together trying to navigate the trail. We also ran with Jordan for awhile. He was suffering some pretty bad stomach issues and decided to just run easy with us. Despite getting lost and having so many issues, it was really nice to all run together. It was one of my favorite parts of the race :)

Around 55k I started to feel amazing! This was totally different from my last, and only other 50 mile race (Lake Sonoma) I've run. I started to pick up my pace and was able to run pretty fast. I pushed hard for the next 20k and past about 15-20 men. It felt great to be passing people rather than just trying to make it to the finish line!


Then it happened again. I got lost. Really lost. I was about 10k from the finish and running with a group about 10 other runners when we came to a 3-way intersection. There were no markings and none of us were sure where to go. It was especially challenging for me since I don't know any spanish! While the other runners stood discussing where to go, I just stood there helplessly since I don't know any Spanish! There were several villagers out watching the race that started pointing down one of the trails. Through hand gestures and body language I understood that the villagers were pointing the direction we were supposed to run. I asked one of the runners who spoke a little English 'if he was sure this was right', because I really didn't want to go the wrong way. He shrugged and said 'I think so'. That was good enough for me. I felt so helpless because I didn't know where to go and I couldn't understand anything that anyone was saying! We kept running and soon after saw yellow arrows indicating we were on course, or so we thought. We kept running following the trail which did lead us to the finish line. I crossed the line as the first female and was all smiles. I was so happy with my race despite getting lost and having such a difficult time early on. 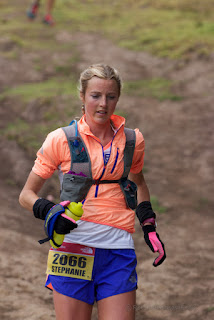 Posted by StephanieMarie at 12:46 PM No comments: