Yep, way overdue. BUT- still within the one month limit! I've had a lot of great things in my life lately so hopefully the late race report is forgiven :) 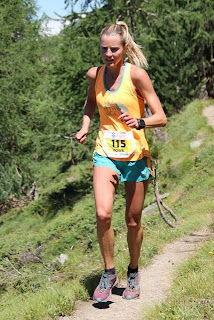 Uff da! Pardon the Minnesotan slang, but that pretty much sums up my feelings after Sierre-Zinal. It ate me alive! I still had a decent race, finishing 8th in the open women's race, but it sure was eye opening. Mountain racing in Europe is much different than in the states. I'm not even sure what made it so hard- maybe it was the relentless 3-mile climbs up the mountain side…..

The race was hard for me from the start. It took off climbing and didn't really let up for hours. I looked at some of my miles afterward and there were a few miles than took around 20 minutes…while racing! That is not fast. I was not prepared for how steep the terrain was. I'm good at climbing, but this was a whole different level.

There were a couple flatter sections near the middle and the last mile was a screaming downhill, but other than that it was mostly climbing. I was moving pretty well through some of the middle sections and passing a lot of people but could not make up all the time I lost early on.

I also made a mistake not carrying my own water. No one had bottles or packs at the start so I decided to ditch mine as well. About 2 miles in I regretted it. I like to drink when I want, rather than waiting for the aid stations. Next time I will definitely carry a small pack.

I was happy that I made it to the finish line. I wasn't too thrilled with my race immediately afterwards, but as time wore on I became more ok with it. That was my first international running race and it wasn't exactly the what I've been training for. I learned a lot and had so much fun in Zinal that it didn't really matter how I finished.

The town of Zinal was so beautiful and it was fun to see it transform from a sleepy little town into a bustling, exciting place during the race. Sierre-Zinal is one of the oldest races in Europe and definitely draws in a lot of racers- this year there was over 3,000 starters. So crazy, but such great energy during the race. It was also amazing to see all the spectators along the course. Most of the aid stations were not easily accessible and it was so cool to have the people lining the course and cheering. I loved it!

There were quite a few elite runners from various countries in Zinal for the race. We all stayed and dined together for the week prior.  It was pretty cool to get to know everyone and spend some time doing things like eating traditional raclette, sightseeing, listening to live Swiss music, and drinking lots of wine!

Even though I didn't have the race of my life it was still a wonderful event! I totally want to go back and race again. Now I know what to expect and can better prepare; although short of moving to Europe for a few months I'm not sure how I'd do it better….

Following the race Zach, Max King, and I had two extra days in Switzerland before we had to be somewhere. So, in typical fashion we decided to go on an epic adventure (because the race the day before wasn't hard enough)! 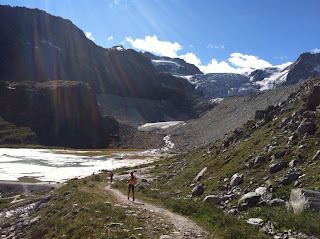 Our plan was to do a big run/hike to see more of the Swiss Alps. It's hard to see much when you are racing and there was still SO much to see and explore.  In Switzerland there are numerous mountain  that offer a bed, warm meal, and breakfast for a small fee. We thought it would be fun to run out to one of the huts, stay the night, then run back the next day. We picked a hut, loosely planned a route up and over the next valley, and took off carrying a small pack with a change of clothes, water, and credit card. That's all. Some may think that sounds crazy. And they would probably be right. But the best adventures always stem from crazy ideas.

Anyway, the run started off heading up and it didn't really stop. At the end of the day we climbed over 7,000 ft covering only 14 miles. It was so beautiful though! A long run through the countryside is really the BEST way to sightsee. The views were amazing, and helped to numb the tired legs. 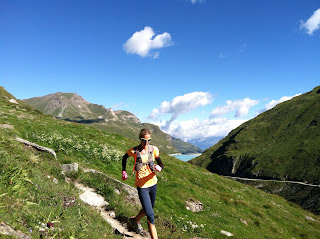 Near our hut there was a peak about 1,000ft higher, called Becs de Bosson. Since it was there we had to summit. From the top we had an amazing view. We could see all the big peaks, including Mont
Blonc and the Matterhorn. The pictures don't do it justice! 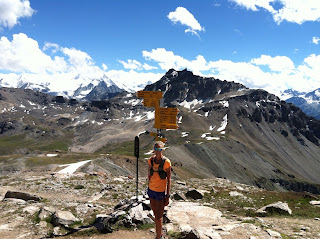 At the top of Becs de Bosson Zach asked Max to take a photo of the two of us. And he stood for the photo Zach got down on his knee and proposed! I was totally surprised! It was the exact perfect moment for us though. How often do you get to run 4 hours uphill to the top of a mountain in the Swiss Alps to get engaged?! I couldn't have been more excited!


The rest of the day was spent smiling. I was so happy! It was such a perfect day. That night we had the best dinner of soup and pasta (probably because we were starving!) and shared a bottle of wine with some of the others staying in the hut. It was absolutely perfect :) 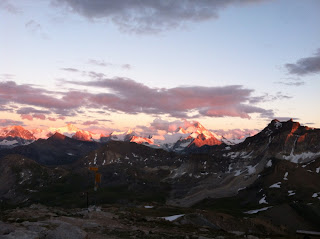 The following morning we woke up and began the run back to Zinal. I had a pretty epic bonk somewhere during the 20 miles we covered, but again it was masked by the beauty of the landscape.
After 3 long, hard days of running I was toast and ready for some good rest. Which was perfect timing  Zach and I were about to travel to Croatia….

We had such a great time and Switzerland and I have to thank Max for the company and taking some awesome photos. Sorry if we made you feel awkward! You're the best! 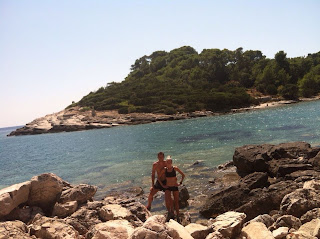 Since we were already over in Europe we decided to tack on a small trip to Croatia. Why Croatia? Well, neither of us had even been before and it sounded like a great relaxing place to visit after spending awhile in the mountains.

Croatia was hot. It made me not want to do much but hang out at the beach. Which is what we did :) It was very relaxing and nice to stay put for a few days.

The city of Dubrovnik was totally destroyed in 1991 during the war. It was crazy to see the remains and how much has been rebuilt. We were warned however not to go hiking outside of the city because there are still land mines in the hills….yikes! I was totally content to stay at the beach :)

We did have some amazing seafood while in Croatia! A great mix of fresh fish and local flair. One night we went out for a great meal at a restaurant that overlooked the sea. Huge plate of seafood and great atmosphere. 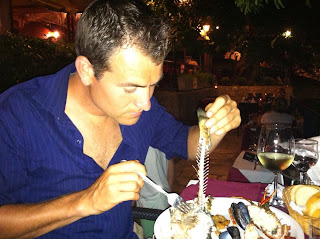 The icing on the cake was our flight back home. The plane from Zurich to Chicago was totally full and Zach and I didn't have seats next to each other. So, instead of moving people around they upgraded us to business class! That NEVER happens! I felt so spoiled! I made sure to take full advantage of the complimentary cocktails :)

We haven't really slowed down since coming home. It was my birthday the day after we got back and of course I wanted to do something big :) We ended up running 31 miles on the PCT from 242 to Elk Lake (beautiful if you haven't done it) and then Zach threw a surprise birthday bbq for me. So great to see friends and catch up after a long trip.

We've been quite the socialites lately and just recently took a trip to Boulder for a wedding. I think we've only had a couple days with nothing planned in the past 6 weeks…. life is great!! 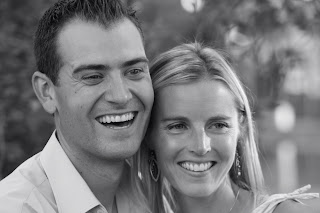 Posted by StephanieMarie at 3:29 PM 3 comments: