In typical Stephanie fashion I decided the day before that I was going to race. I wasn't sure it was a good idea because it was between my last week of class and finals week at school, meaning I was BUSY! I really wanted to get a longer effort in before I leave for Ecuador in a few weeks so I decided to give it a shot and have a 'fun' race.


Turns out, it went pretty well. I was super happy with my race, finishing third was better than I expected! There was some great competition this year, both local and out of town runners. Locals Max King and Marci Klimek took home the wins. Full results: 2012 Dirty Half


I think I started a little too fast trying to stay with the lead girls. There was a pack of four of us for the first few miles, then Megan Kimmel and Marci Klimek broke away. I tried to keep contact but common sense told me to slow down or else I would die :) I ran mostly by myself, although I kept getting glimpses of Amber Morgan, who was right behind me. I just told myself to see how long I could hold her off. When I reached mile 10 and she hadn't caught me I thought I had a chance. It was around that time that I got a second wind, finally recovered by my initial speed surge. The last three miles were really good! I was happy to be able to push and catch people, rather than trying to just finish. It was a great finish! 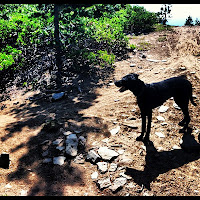 The next day I decided to do a loooong run. I'm getting ready for some ultra races in the near future and needed to get some miles in. I took my dog and headed out for a 20+ something run on the Tumalo river trail/Marazek/Phil's trail. It was an absolutely beautiful day! The Tumalo river trail is one of my all time favorite trails in Bend! It's pretty rugged, but the scenery is stunning and there are some fun parts, like crawling through a rock tunnel and climbing over boulders.

Posted by StephanieMarie at 12:49 PM No comments: