Ok, let's get one thing straight. This is not pizza. It's delicious and wonderful, but it is not in the same family as pizza. 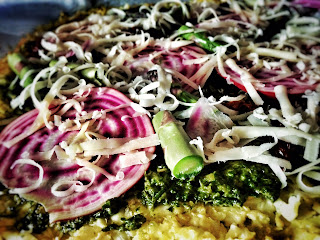 I love homemade pizza, and the only ingredients I want in the crust are:
-Flour
-Extra Virgin Olive Oil
-Sea Salt
-Yeast

That's it. No crazy additions or substitutions. Keep it simple.

One of my biggest pet peeves is when a recipe claims to be healthier by labeling itself as "gluten free" or "vegan" or "sugar free". More often than not these recipes are not any healthier and usually include some sort of substitution. Using gluten free flour in place of all purpose flour is really not healthier. Nor is using "flax eggs" in place of real eggs. I think recipes CAN be healthier, but usually that means using high quality ingredients, not putting a label on the recipe. I digress.

When I was browsing recipes recently, I noticed that non-traditional pizza was a common theme. A cauliflower based crust has been somewhat mainstream over the past year or so, but now dozens of recipes exist. I've always thought cauliflower crust sounded interesting, and now with the emergence of the veggie based crust all over the internet, I decided I needed to try it out.

However, after briefly reviewing some of the recipes for a cauliflower crust, I didn't like what I found.   First off, many of the recipes were healthified and labeled as gluten free. Ok, duh...I don't think anyone ever thought a vegetable contained gluten. [SIDE NOTE- seriously people. Can we get over this already? I recently bought a package of berries that were labeled gluten free. You think??] But I noticed that many of the recipes for cauliflower crusts also contained some sort of flour flour, such as rye, buckwheat, or gluten free flour. This seemed paradoxical to me. If I wanted a flour crust I'd make one. The point of the cauliflower crust is to use vegetables...right?

The recipes that didn't use flour seemed really heavy and dense. Many used a lot of mozzarella cheese as a binder. And if they were vegan, they didn't use eggs or cheese, but used "flax eggs" and "soy cheese" or something of the equivalent.

I thought I could do it better.

I sought out to make a crust that was vegetable based, didn't use an alternative grain for filler, and  didn't include any weird substitutions. Just real, simple ingredients that taste good.

I started with a head of cauliflower. I bought mine from the local produce stand that just came fresh from the farm. So fresh!

After about 20 min the moisture content was reduced. I let the cauliflower cool down and went to work on the rest of the crust.

I liked the idea of using eggs in the crust because they contain some protein and good vitamins (in the yolk). Eggs also have binding properties when used in baking, which would help hold the crust together. I liked the idea of cheese, but I was planning to have cheese on top of the pizza. I didn't want to add a whole extra cup or two to the crust. Instead, I decided to use cottage cheese. Working also as a binder, cottage cheese contains some fat and protein to make a more well rounded nutritional profile. The cottage cheese also adds flavor, but is not as heavy as mozzarella cheese. My crust recipe contained the following ingredients:
That's it. I'm very happy with that list. All healthy, real food ingredients that are nourishing to the body.

To make the crust, I combined the eggs, cottage cheese, and salt in a small bowl and whisked together until well combined. I then added the cauliflower to the mixture.

To bake, I covered a baking sheet with parchment paper, to ensure that it wouldn't stick to the pan. Since this was a new recipe I wanted to be sure before sacrificing the surface of my new baking sheets.

I spread the mixture out onto the pan and pressed into a thin layer. It felt a little wet to me, so I pre-baked the crust for about 10 min at 300 degrees. After taking it out of the oven it was firm and fragrant. Success!

Now for the pizza itself.

I'm slightly obsessed with pesto, especially on pizza. I didn't use to like it much, until I tried a homemade version at a friends house (that'd be YOU Kelli Lytle). THANKS! It forever changed my outlook on pesto.

For the pizza toppings, I wanted to be a little different since this was, after all, a unique recipe. I settled on pesto, sun dried tomatoes, chioggia beets, asparagus, shredded dubliner cheese, and arugula. 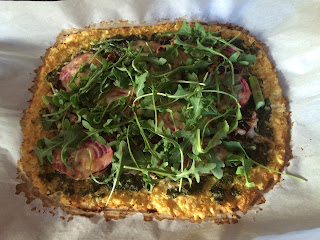 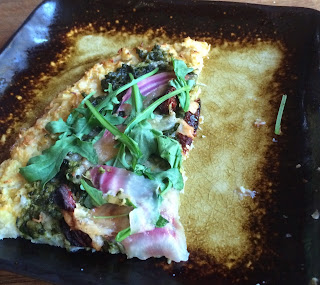 Bonus version
I made a version of this pizza in a hotel room while on the road. Yes, in a hotel room. It was quite impressive. I did have a toaster oven that I brought along, so it was possible to bake. I also had a travel blender that I used to process the cauliflower. How's that for creativity? Indeed you can eat healthy on the road! 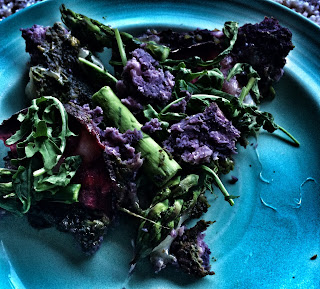 Instructions
To make the crust, start by adding cauliflower to a food processor. Process small amounts at a time until you have a "rice like" consistency. Add cauliflower to a baking sheet and bake at 200 for 10-15 minutes to dry out. Check the cauliflower after about 10 minutes and stir. You may need to bake for longer, depending on the moisture content. The cauliflower is done when it feels dry to the touch. Next, add the egg and cottage cheese to a large bowl. Mix to combine and add cauliflower mixture. Mix thoroughly and spread out onto a non-stick baking sheet. I used parchment paper to prevent sticking. Spread out evenly and thin. You can return the crust to the oven for a few minutes, but it's now ready for toppings.
To make the pesto, add all ingredients to a food processor. Turn on and combine until a smooth paste. You may need to stop and scrape down the sides a few times. Add more oil if the consistency is too thick.
To assemble, spread the pesto on the cauliflower crust. Sprinkle with sun dried tomatoes. Top with thinly sliced beets, asparagus, and prosciutto (if using). Sprinkle shredded cheese on top. Bake at 350 for 10-15 minutes, or until crust is firm and cheese is bubbling. Remove from oven and add arugula on top. Return to the oven for 2-3 more minutes or until arugula is wilted. Remove from oven and sprinkle with sea salt and olive oil.
Let cool for a few minutes before slicing. Yum!
Powered by Recipage

I am slightly obsessed with Pesto. 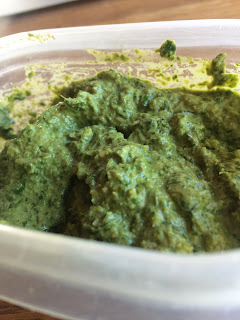 However, I didn't really care for it until a few years ago. I would always choose tomato sauce over pesto on my pizza. That is, until a friend introduced me to the deliciousness of homemade pesto. We were having a pizza party one night and each person was supposed to contribute an ingredient for the pizza. I don't know how this happened since we didn't discuss what we were bringing, but we ended up with: homemade pesto, prosciutto, pear, gouda cheese, and caramelized onions. What were the chances? It was the makings for an epic pizza.

My good friend, Kelli Lytle, is an amazing cook. I turn to her for much inspiration. She is always creating the most delicious and unique foods to share. I look forward sharing a meal with Kelli. She always makes the best things! Especially dessert!

Anyway, the homemade pesto that Kelli brought to pizza night blew my mind. It really MADE the pizza. So good. Since then I've made my own versions, varying the ingredients a bit. The base ingredients are the same each time though: 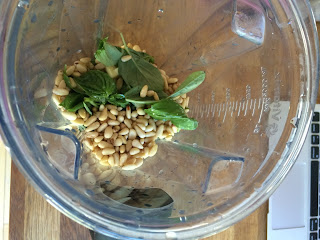 To make the pesto, I first start with raw pinenuts and toast them myself. It's so easy to do and the fragrant smell is amazing. There are two ways to toast pinenuts:

I prefer to toast them on the stove, but either method works. Once the pinenuts are cooled add then to a food processor along with the basil, olive oil, garlic, and sea salt. Turn on and process until smooth. I usually have to scrape down the sides a few times and add a little more olive oil for a smoother consistency.

Serve immediately for store in the fridge for up to a week. 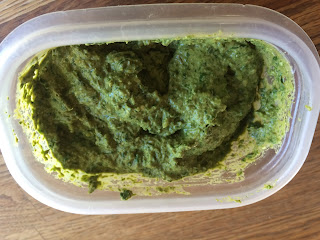 In the Oven: Pre-heat oven to 300 degrees. Add pine nuts to a baking sheet and bake for about 10 min, until fragrant just starting to brown. Stir every 5 minutes to prevent burning.
On the Stove: Heat a pan over medium heat. Add the pinenuts and toast for about a minute, then toss. Keep heating and tossing every minute until pinenuts are brown. Remove from heat.
Pesto

Add cooled pinenuts, basil, olive oil, garlic, and salt to a food processor. Turn on and process until smooth. You may need to scrape down the sides a few times and add more olive oil for a smoother consistency.
Powered by Recipage
Posted by StephanieMarie at 11:42 AM No comments: