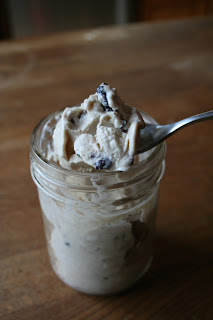 Yum. This ice is cream delicious and creamy. We’ve been on a homemade ice cream kick at our house. So far we’ve made eggnog (for Christmas eve), chocolate, and plain old vanilla.

But, it was time to step outside the box and try something new. I wanted to try a cashew and coconut based ice cream rather than the traditional cream + egg recipe (which, IS amazing but the way). I loathe “heathy” ice cream recipes that have an icy texture and weird ingredients. Keeping true to my nutritional philosophy, I wanted to make a recipe that was tasty using REAL ingredients. No fake stuff. Or processed stuff. So here is my first attempt. There is room for improvement, but I can say that the resulting product was pretty tasty and creamy.


Lately I've been obsessed with Flora Rooibos Chai Tea. It's been my go to mid-morning pick me up. A touch of milk, a touch of honey. Perfection! So I had to incorporate this delicious spicy, sweet flavor into ice cream. It was meant to be! 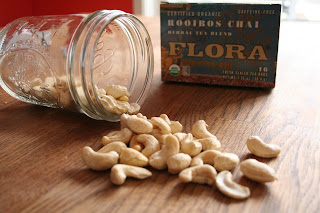 As I mentioned, I wanted to make an out-of-the-box ice cream recipe. Since vegan, nut-based recipes are all the rage right now, I decided to create my own. I love the creamy texture of cashews, so I paired them with the creamy goodness of coconut milk. The trick to non-dairy ice cream is to include FAT. This recipe is not low-fat at all, it has plenty of creamy texture from the cashews and coconut milk. That's why it tastes good. But, unlike regular ice cream, this recipe also packs added nutritional benefits. 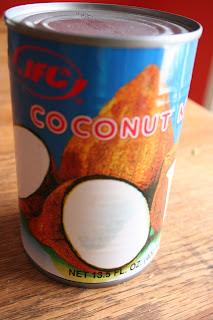 For the sweetener I decided to use a mix of maple syrup and dates. Mostly because I love the taste of maple syrup. Especially paired with the chai! For a thicker texture I used half dates (1/4 c of each) to create the consistency I was looking for. I think any sweetener of choice would work here.

Finally I needed something to add a little more sustenance. My first attempt at this recipes resulted in a bit "chalky" flavor, as described by Zach. No good. The second time around I adjusted the ratios and added in a banana. MUCH better. I also added cacao nibs for some crunch, which I would highly recommend! 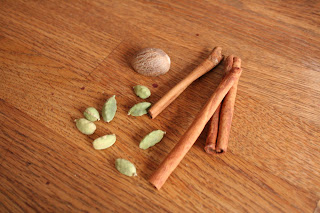 Another important note- I used freshly ground spices. It's not hard to grind your own and it's SO SO worth the effort. The fragrance of freshly ground spices is hard to beat. All you need is a grater (cheese grater can work) and mortar and pestle (or bowl and spoon in a pinch). 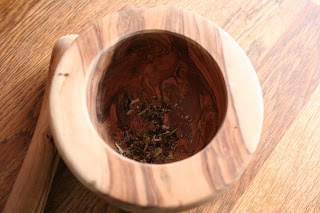 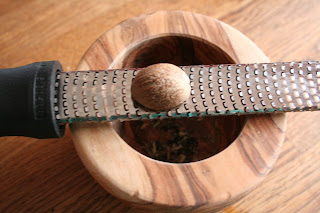 To prepare the ice cream, just blend all ingredients and add to an ice cream maker. It mixes just like a dairy based ice cream, so follow the instructions of the manufacturer. 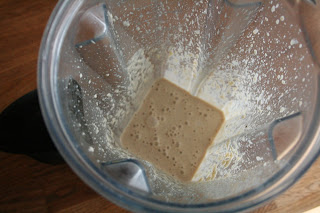 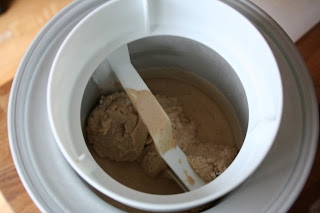 The finished product is delicious. A topping of chocolate salt and drizzle of maple syrup doesn't hurt either! 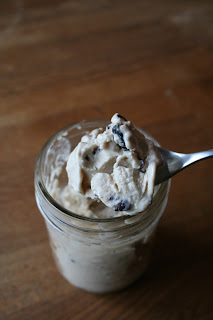 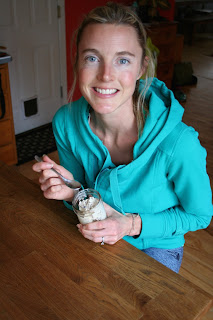 Soak cashews in water overnight to soften.
Prepare the Chai

Add 1 Flora Rooibos Chai Tea bag to 1/4 c of boiling water. Steep for 5 min, then remove tea bag and squeeze out excess liquid. Store tea in the fridge until ready to use.
For the Spices

Break apart green cardamom pods and discard the pods. Use a mortar and pestle to finely smash the cardamom until a fine dust. For the cinnamon and nutmeg, freshly grate and set aside
To prepare the Ice Cream

Add cashews, banana, coconut milk, spices, salt, maple syrup/dates, and tea to a blender. Turn on and process until smooth. Transfer to an ice cream maker and follow instructions (about 20 minutes). In the last 5 min add the cacao nibs. Store in freezer. To serve, allow to warm for 3-5 min before scooping. 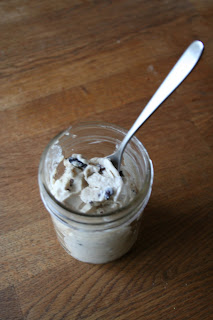 Powered by Recipage
Posted by StephanieMarie at 2:10 PM No comments:

After a couple weeks, the initial shock of surgery wore off and I was finally able to conceptualize what happened. And then the pain set in. Both physical and emotional pain flooded over me, taking me by surprise. The first couple weeks were all about adjusting. I was finding a new state of normal, both in my body and how I structured my day. No more was I carving out the time to fit in one, sometimes two workouts a day. Instead, I was trying to fill that time with something else. The first week or so back home was easier than I thought. Mundane tasks, such as taking a shower or walking into the kitchen, took effort. So each day was comprised of literally just taking care of myself. It exhausted me to really do anything. For a few days I didn’t leave the house and used all my energy to just exist. It sounds more dramatic that it was, but I didn’t have much motivation to go above and beyond activities of daily living.

After graduating from crutches, I was more excited to get out and about. And then the first wave of pain hit me. It was an emotional wave. Suddenly I wanted to be active again. For years, my day has revolved around some sort of activity, and I was empty. I longed to join my friends and husband as they went out for epic ski and running adventures over the holiday break. As I sat and twiddled my thumbs waiting for said friends to return from said adventures, I felt an inner frustration rising. Sadness, misery, and envy began to show their ugly faces. I could hardly even bear spending time with my friends because I didn’t want to hear about things that were suddenly not part of my life anymore. It was depressing. And I just wallowed in it. I found myself waking up and just trying to waste the day so I could go to sleep and have it be tomorrow. I felt pretty down and wasn’t sure how to move past it.

While I was working to process the emotional pain, I was hit by a second wave of pain. This time physical pain. Again, it hit me out of the blue and took me for surprise. Post-surgery I had little to no pain, just a swollen foot and no mobility. But, as the swelling went down and I started to test the waters, I felt a sharp, deep pain with movement. It sent me spiraling backwards in my mental recovery, as I was expecting relentless forward progress on the physical side. Each step I took was excruciating as I slowly limped around. I got looks of pity from passerbyers  and had people open doors and help me carry things. It was a nice gesture, but reminded me just how utterly inept I was. I spoke with my surgeon in Sweden and he assured me that this pain was normal and to be expected. I was on track and just needed to be patient. Right.

So to add insult to injury, not only did I have to stay sedentary, but I was also physical hurting and beating myself up for it. Not good. Not good at all. These feeling culminated one day when I found myself so distraught I could hardly stand it. Zach came home from skiing to find me in tears on the couch clutching our dog. I was distraught. I couldn’t see past the present moment. We spent the next three hours chiseling away the layers to get to the core of the problem. Two cores actually. One was my need to feel alive through physical movement. I had been able to do some rowing and lifting, but it didn’t really satisfy my need. I wanted to be outside and breathe fresh air. Since Oregon is on track for record snowfall this year, it wasn’t going to happen at home. So we decided maybe a trip to somewhere warm for few days might be in order. Problem number one = check.

Problem number two was a little more complicated. I have this internal desire to be perfect at everything I do and to prove myself time and time again. And when I don’t live up to my standards, I beat myself up. What I realized after talking to Zach is that I am enough. I need to be kind to myself and not hold myself to such unattainable standards. A week or so ago I had set a goal to get out of the house everyday and do some sort of activity. I had been alternating between the ski ergometer and rowing machine at the gym for about 20-30 minutes. During my teary-eyed heart to heart with Zach I confessed how I felt my time at the gym was so pointless and infuriating. It took so much mental effort to complete 20 minutes. 20 minutes! That is nothing when you are used to running for hours each day. Zach just looked at me and said “If I were you I’d just lay on the couch and watch movies. That sounds terrible. You are my fucking hero for going to the gym everyday.” And then I smiled for the first time all day.

Fast forward a week and I’m just returning from my warm weather get away. I gained perspective and a healthier outlook on my recovery. Today I only feel remnants of both the emotional and physical pain. I allowed myself to heal and am coming back stronger than I was a week ago. My foot only has a scar remaining and I’m walking without a limp. My mind is clear and I am smiling much more every day.

The next phase of my recovery will be adding in some actual cross training! At 5 weeks post-surgery I can begin light cycling, which means 15 minutes, 3 days per week. I look forward to this benchmark as it means I can do real, actual activity! But I’m also bracing myself for another wave of emotional turmoil as I readjust once again. But that’s a whole week away. For now I’m going to enjoy my new found contentment and appreciation for just being me. I am enough.