I was more nervous that normal because this was my first race back from injury. Nothing like easing your way back in, right? I had a plan going in and that was BE CAREFUL. I really didn't want to end up sidelined with injury again. So that meant starting pretty conservatively. In fact, I was pretty far behind the leader going up the first climb. Still, I somehow ended up third women to the top of the hill. I passed the second place girl, Alicia Shay, going out of the aid station at the top. A wave a confidence washed over me. I was happy to have made it to the top in one piece and feeling pretty darn good.


The next section was a pretty gnarly downhill for 4-5 miles. I feel pretty good about my downhill skills, and was moving pretty well across some pretty tricky footing (READ: dry creek bed). Out of nowhere Ruby Muir FLEW by me going mock 10 down the hill. I couldn't even pretend to stay with her for a moment. She was fearless! I was impressed….

At the halfway point, there was a small section of out and back where I was able to see how far ahead/behind other runners were. It was nice to see some of the lead guys, teammates Tim Olson and Mike Wardian were out on course and gave me big smiles as we passed each other. Not long after I got my first glimpse of Jodee Adams-Moore. She was flying and looked great! I looked at my watch when she passed and again at the turnaround and calculated she was roughly 12 minutes ahead. Solid.


The next section was about 6 miles of climbing, back up to Hidden Peak. I knew (or thought I knew) what to expect because I had looked at the course profile in pretty good detail. Ha. Little did I know how steep the climbs were ahead of me. There were many times I said to myself or maybe out loud "You have got to be kidding me! We are going up that?!" I have to hand it to Karl- the course was pretty epic. The loop kept me on my toes and always aware and the view was breathtaking.

I think the most memorable part of the course came near miles 20-22. There was a wall, not a hill but a wall we went up. It reminded me of the last mile of the Mt. Ashland hill climb, which is a steep scramble to the top. Except in that race the finish is at the top. In this race, there was still 8 more miles to run. In any event I suffered my way up, doing the death walk with my hand on my knees.

The last 5 miles was screaming downhill. The top mile or so was pretty rocky and technical. I wasn't moving too well and was just waiting to get caught. Then, it opened up a bit to a smooth dirt trail. Finally I was able to get into a groove and let gravity pull me downhill. It was around this time that I could see Jodee. And she was not far ahead. I kept my pace steady and caught her within a minute or so. From that point we had about 3 or so miles to the finish. "Should I pick up the pace and try to pass her here?" I didn't want to go too early and bonk near the end. I thought about it for a brief second and somehow the voice of Mike Foote, a fellow TNF teammate, was in my head. 'Take chances' was what he'd told me before the race. So I decided to go and just give it my best. I picked up the pace and clicked off some fast miles (later Garmin revealed 5:40's for the last few miles). I knew Jodee was right behind me, so I didn't let up. I suffered. And I suffered even more when I realized that the trail ran past the finish line and then looped back around. Not a good surprise when you are running balls out and ready to be done.

I held my place though and crossed the finish line first with a big smile. Wow, I never thought it a million years that I would win Speedgoat! What a great surprise!

I was greeted by many friends at the finish line. It was great to exchange high fives and share my excitement with so many other runner. I really have to thank Tim & Krista Olson, who took care of me afterwards. I was at the race solo, so it was nice to have someone to hold my stuff and get me water. Thanks guys! Post-race, Karl had pizza and beer as part of the finish line spread, which also didn't suck. It was a great way to end a hard day in the mountains.

I still can't believe how well the race went for me! I'm still smiling :) BIG thanks to my coach Ian Torrence, who helped me get here fit and in one piece! Next up…..off to Europe for Sierre-Zinal. I can't wait!!

http://www.reboundoregon.com/biomechanics-lab/
Posted by StephanieMarie at 10:34 AM No comments:

Western States
I had a last minute opportunity to pace Denise Bourassa at Western States this year. I was pretty excited to head down to Squaw and be around all the excitement again. It was a great weekend and Denise finished 8th! She impressed the heck out me with her perseverance and mental toughness. I was excited to be a part of her team and help get her to finish line in the the top ten :) Congrats Denise! 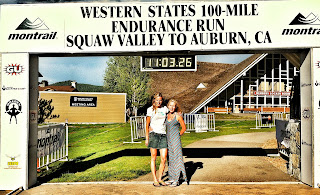 It was fun to see so many other friends/racers over the weekend too. I was able to catch up with some old friends that I haven't seen for ages! I was so proud of everyone and impressed with the efforts put out despite the heat.

I was also able to run the Montrail 6k Uphill Challenge the day prior to WS. I ran last year and had a blast and was excited to do it again this year. I was the first woman up the mountain again this year, running just over 32 minutes. Both times I've done the 6k Uphill race I've been humbled as I cross the finish line- this is just the start of the WS run. They still have to run 97 more miles! What a tough start to the day! Granted most runner probably don't red line up to the top like I did, but still, they have the same amount of climbing to cover. Anyway, it was a great effort and I had fun running and spending some time at the Chalet at the top. Oddly enough (or not at all) Max King won the men's race. I swear everywhere I race around the country I see someone else from Bend on the podium. Small world.

After getting back from watching Western States I was pretty inspired to start training. This was good timing because 4th of July fell on a Thursday, giving me a 4-day weekend. And I sure took advantage. I went running up in the mountains every day!

Thursday: Zach and I started a 4th of July tradition last year that involved a long adventure. This year was basically a repeat of last year, just in a different place. We ended up out in the mountains for 8 hours….lost for a good chunk of it. We did make it back AND managed to stay awake for fireworks! 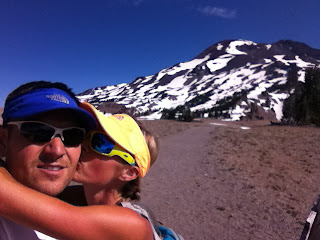 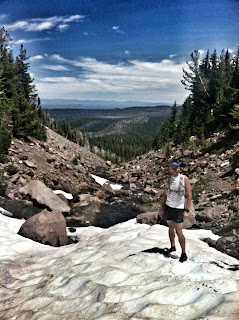 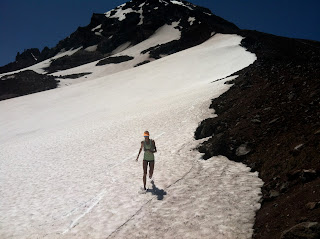 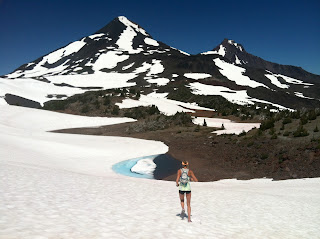 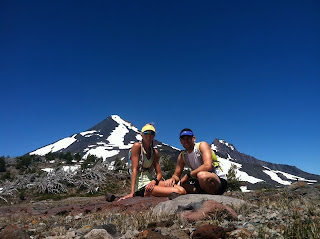 Friday: Devils Lake & PCT loop. I was pretty tired, but it was a beautiful 11 mile loop nonetheless


Saturday: South Sister via Green Lakes and Morraine Lake trails. I took Riley with me on this run. Lots of comments about a dog summiting South Sister…. 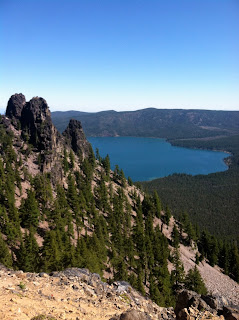 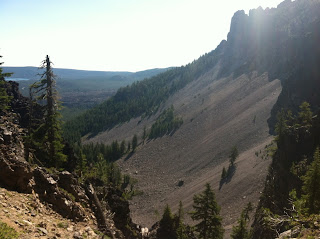 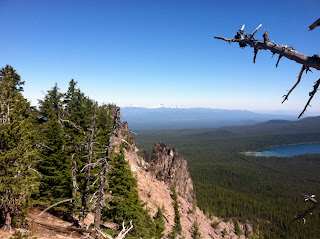 Posted by StephanieMarie at 10:57 AM No comments: