One again, I raced in the Gorge Waterfalls 50k put on by James Varner at Rainshadow Running. Again, he put on a fantastic event with a great race course and plenty of fun surrounding the race. If you haven't done one of James' races before I highly recommend it!

Weather in the Gorge area (border of Oregon and Washington)  can be a little treacherous, especially in early spring. This year however, we couldn't have asked for better weather. It was a bit chilly at the start, but warmed up to the mid 50's-60's and it was SUNNY! Anytime there is sunshine in Oregon (Bend not included) it's a good day. I was pretty psyched to put my rain jacket away :)

My race was a lot of fun. I didn't really have a plan or a goal, I just wanted to have fun. This was supposed to be a fun weekend for me and my only goal was to be smiling for most of the race. I think I successfully accomplished my goal (see race photos). 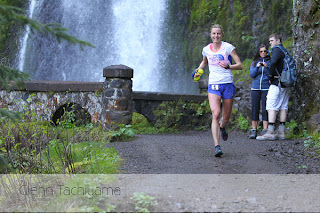 The course is a pretty hilly out and back, with a few small technical sections, and LOTS of beautiful scenery. There are many waterfalls and there is always something to look at as you run. This year at the turnaround (which is unmanned) runners had to pick up a poker chip out of a bucket and bring it back to the next aid station for 'proof' of making it to the turnaround. I loved it. Takes some of the seriousness out of a race and makes it more fun. I was running with a great group of guys who were also having fun. It was nice to chat with them and have some company for the a portion of the race! 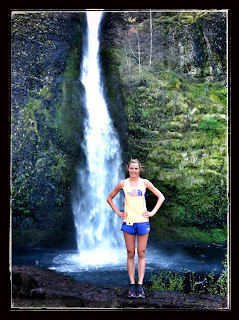 The end of the race is always tough. Just when you think you're getting close you hit a 3 mile climb. It's brutal. There's about a mile of switchbacks, which are numbered so you know EXACTLY how much further you have to climb. I always try not to look, as it's pretty demoralizing to see 'switchback 3 of 12'. This year I ran the whole hill, which was more of a mental battle than anything. I'm good at long grinders, so it played to my strengths. I'm not saying I was moving fast, but I did keep moving forward. Over the hill I moved up 3-4 places and kept going strong to the finish. I crossed the finish line in 3:49, which was good for a new course record. I'll take it! It was a fun day and I didn't feel like I had pushed too hard. I kept it fun, which was the goal for me :)

There were a number of Bend locals who also had great races. Mario Mendoza, still new to ultras, was leading the race before he injured his ankle. He is going to be one force to reckon with when he's healthy! Zach had a super day and ended up 3rd, followed by Ian Sharman in 4th, and Jeff Browning in 6th. There was a pretty strong men's field, including the likes of Hal Korner, Yassine Diboun, and Chris Kollar, so I was proud to see so many friends finish so high. On the ladies side, other Bend locals included Darla Askew and Susan Barrows finishing 3rd and 4th, respectively.

Now onto the good stuff :) James really outdid himself this year. Moments after crossing the finish line runners were greeted by the smell of a wood-fired pizza oven. Yes, that is correct. There was a wood fired pizza oven on site making customized pizzas for the the runners. Is there anything better? Oh yeah, there was also a keg of beer to accompany said pizza. And if that wasn't your style there was plently of other good fare, including fresh fruit and vegetables, chips and guac, sandwiches, cookies, etc. Seriously one of the best post-race food selection/party I've ever been to.

Post-race festivities for me included wine tasting. Zach and I had never been to the Dundee area before (south of Portland), which is known for it's Pinot Noir. My favorite. We had to hustle a bit to make it to a couple of tastings, but it was worth it. We visited Lange and Erath and had a couple (READ: multiple) tasters before calling it a day. Such a great day!

The nest morning we drove into Portland and did NOTHING. It was wonderful! I hardly ever do nothing. We did stop by Albina Press, one of the best coffee shop in the world to get some good espresso. Other than that, we shopped around a bit and got some lunch in the Pearl district before heading home. Even the drive home was beautiful with all the sunshine. 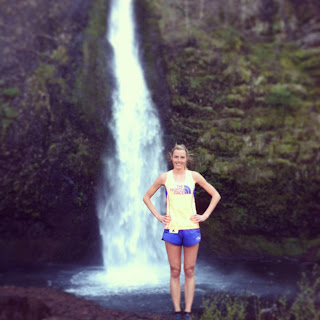 Posted by StephanieMarie at 12:54 PM No comments: