Breakfast is my favorite meal of the day. I love to sit down with a huge mug of coffee and leisurely eat my breakfast while catching up on emails. In my ideal world, breakfast takes anywhere from 1-2 hours. I love preparing a good, healthy, satisfying meal each morning. Some of my favorites include homemade waffles with nut butter, crepes with gruyere cheese and ham, smoothies, homemade macca muffins, poached eggs on homemade bread, etc. Although delicious, NONE of these are quick. On a weekend, no problem, but during the week I don't have time to sit an watch my muffins cook in the oven for 15 minutes.

I need something quick most mornings.

But, I hate to have a just eat a crappy breakfast because it sets the tone for the day. When my breakfast is rushed or not a healthy, satisfying meal I feel off.

These are so simple to prepare the night before and are easy to take with you on a busy morning. Plus, the options are endless! There are so many ways to customize the overnight oats recipe that it's hard to tire of them.

The recipe below for Coconut Cardamom Overnight Oats is one that I have been enjoying lately. Part of why I like this recipe is because of it's nutritional benefits:


by Stephanie Howe
Prep Time: 2-3 minutes
Keywords: raw breakfast vegan Pre-workout
Ingredients (1 serving)
Instructions
In a small bowl combine coconut milk, chia seeds, oats, banana, cardamom, and cinnamon. Stir together until well combined.
Cover the bowl and place in the refrigerator overnight.
In the morning, mix in yogurt, and hemp hearts. Top with pepitas and drizzle with JEM cashew cardamum nut butter . Sprinkle with a dash of cinnamon if desired.
Powered by Recipage 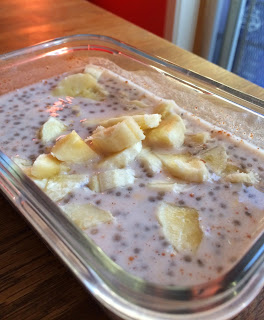 Mix together the night before 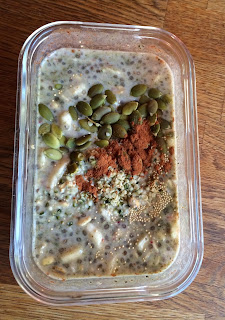 The next morning, add the rest of the ingredients, stir, and top with pepitas, nut butter, and cinnamon. So easy! 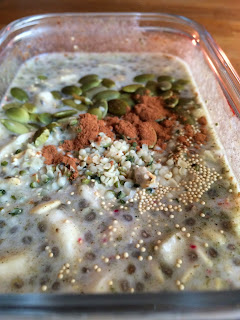 Lake Sonoma was my first 50 mile race ever. In 2012, I was a newbie runner, with three 50k races under my belt. I was [timidly] ready to make the jump to the 50 mile distance. I did my best to prepare, including some great tutelage from my good friend Meghan Arbogast. I was as ready as I'd ever be...except I got the stomach flu a few days beforehand. Not the best feeling going into your longest race ever. Anyway, I still raced and finished third. Far from an ideal race, but I was just happy to cross the finish line in one piece! Back then, only the top 2 places earned Western States spots, which I was a little bummed about. BUT, honestly that was the best thing that could have happened to me. After one 50 mile, I was no where near ready for 100 miles.

Anyway. Back to Lake Sonoma.

So the first year I raced I finished third. In 2013, I was planning to race, but was forced to sit it out due to injury. 2013 was a big year for learning. I was injured almost more than I was running. I learned the hard way not to do too much too soon. Looking back now, I'm like what were you thinking?!

In 2014 I returned to Lake Sonoma, healthy and ready to run. It was a cool day and I felt much better than my previous attempt. Emily Harrison took the win and course record that year in 7:26. I finished a several minutes back, in 7:33 for second place. I cut off nearly 45 minutes from my previous time, which I felt good about. Plus, Emily is a runner I really look up to and was psyched to not get totally annihilated :)
I decided to run Lake Sonoma again this year because I hadn't felt that I nailed the race yet. Sure in 2014 I ran well, but the last 11 miles ate me alive! There was still a lot of room for improvement. Maybe not so much in my time or finish, but in the way I ran the race. I wanted to still be pushing at the end, not merely trying to survive the last couple hours.

If you would have asked me my goals going into LS this year, I would have said that it was a bonus race for me. I wasn't targeting it nor did I feel that I had really nailed my training leading up to the race. I simply wanted to get another race start under my belt for the spring and to run the last 1/3 of the race better. My goal that I didn't really tell anyone was to run around 7:30. I thought that was attainable if I had a great day. I thought 7:33 that I ran the previous year was pretty darn fast under ideal conditions. I also wanted to finish on the podium. I knew there were quite a few women capable of that feat, and I wanted to be among them. irunfar Pre-Race wine tasting Interview


Turns out someone lit a fire under my ass.

I don't know what got into me. Somewhere around 5-6 miles into the race I decided it was my day. It was my f$%^& day to run this race. I wanted to lead wire to wire and if I couldn't, well at least I'd put up a good fight. That doesn't mean that I went balls out from the gun. I still paced myself early on and had some good chit chat with Cassie Scallon early on. Once we crossed the river, around 11 miles in, YiOu Wang, Topher Gaylord, and I grouped up and ran for the next 10 miles or so. It was pretty comfortable and I was enjoying their company.

There are basically three big climbs on the LS course, and they all occur around the halfway point. I look forward to those long hills because I can finally get into a groove. All those quick spicy hills don't suit me very well. It was on the first of the three long uphills that I kind of went for it. Again, nothing crazy, but I just got into a groove and let my legs do their thing. On the downhill side, instead of holding back, I pushed the pace. Why not give it a try?

I was definitely having fun, pushing the pace on the uphills and letting my legs roll on the downs. After a brief moment of panic at the halfway point: someone stole Brian Tinder's weed!! JK- that is a joke....he made a funny at the aid station, I was excited to start the trek back to the finish. I really was looking forward to the turnaround for two reasons:

2. To see and cheer for other runners passing by running outbound. It boosts my mood to see other racers, especially some of my good friends!

Somewhere around 30 miles in, I sort of paid the price for all the "fun" pushing the downhills. My quads were trashed. Oh well. I knew I could run 20 miles on trashed quads, it was just a matter of keeping my energy levels up. I continued to fuel well (3 Clif shot gels per hour) and tried to run as smooth as possible.

I can't say that I really enjoyed the last 11 miles, but I was able to keep pushing forward. My legs hurt pretty bad, but I kept a good attitude and tried my best to not let the wheels come off.

When I race I normally don't look at my watch at all. I like to just go off feel. I do keep tabs on the miles though, and when my watch buzzed at mile 44 I looked down at the time. "Holy crap- if I can just average 10 min miles for the last 6 miles I'll have a course record!" That was actually the first time that thought crossed my mind. And as I neared the finish, the course record became a more tangible prospect.

The last mile of LS is killer. If anyone tells you different, they are lying. It's mostly uphill and there are some rocky sections. It's seems to take an exponentially long time. In the past years I've fallen in the last mile because I just couldn't pick up my feet enough. No falls this time, but plenty of fatigue.

I made it to the finish line in 7:08!! Which surprised the crap out of me! I didn't think I could run that fast, especially on a course like Lake Sonoma. No one was more surprised than me. In a good way :) I did put myself under pretty good, but it was worth it because I really wanted that double magnum of wine that had eluded me the past few years!

I've had lots of time to process my race at Lake Sonoma, and I'm still not entirely sure how I pulled it off. Comparing my race from 2014 to 2015 (I'm not a data geek, but this is interesting), I thought I'd see similar splits for the first 30-40 miles, then a much better pace for the last 10 miles. Not exactly. I actually just ran about 30 seconds per mile faster for the entire race. Interesting....does that mean there is still room for improvement over the last 10 miles? Haha. I don't know, but I'm pretty content with my race. In fact, it may have been one of my best races ever......

Of course, I couldn't have raced so well without some great support. I am the luckiest girl alive to have THE BEST crew on the planet! Thanks Elisa Cheng and Brian Carroll for being awesome. And a special thanks to Zach, who not only crewed for me, but also put up with my pre-race shenanigans and drove me to the start at 5:30am.

And another big thanks to my sponsors: The North Face, Clif Bar, Flora, Nathan, and Julbo. Their support and products make it possible for me to race!

And finally, (is this the academy awards?!) thanks to my coach Ian Torrence for preparing me to kick ass and to Burke Selbst at Focus Physical Therapy for keeping me healthy.

It takes a village.